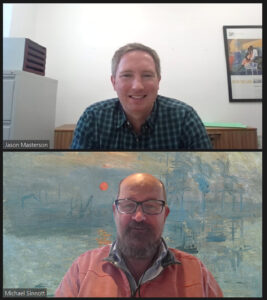 Sometimes it is not until you are saying goodbye that you think of saying ‘hello’.  I had that experience recently when a LinkedIn alert announced that Jason Masterson, Student Centre Manager for some time, had a new job.  “Jason’s gone!?”  It turned out that he had moved to a role in UCD Estates on November 1st so all the goodbyes in LinkedIn were just a precursor to ‘hello again’.  I know Jason from August and September orientation seasons, over a number of years, and from the great help he was when we held 2019’s Work Smarter Together event in the Student Centre, so I Zoomed him for a ‘goodbye’ and a ‘hello’.

After the largely silent start to the 2020/2021 academic year, I asked Jason about all the work needed for the start of term this year.

“Probably the biggest story of collaboration was the operation of the welcome marquee.  In and of itself a tent sounds like a very basic thing, but the marquee ended up living as part of the UCD fabric for about eight weeks, starting with the University’s conferring ceremonies”.  The tent was over in the quad by the Sports Centre.  “The key point in the middle of all of this was to orientate first year students and welcome the continuing students back to their programmes”.  What became two and a half weeks of orientation saw over 30,000 student contacts go through the tent, with welcome packs being distributed and with sports clubs exhibiting their wares and recruiting new members (23% more than in 2019).

Even with all the work across the campus that went into preparing for the returning second years, it was not clear how it would go.  How would you measure?  “Goodie bags.  We though we would give out about three thousand goodie bags – effectively two thirds of the cohort – but gave out seven or eight thousand because the third and the four years and everybody else who was returning to the campus got involved in the buzz”.

I had been on campus on a couple of days during that time and it was amazing to feel the difference to the lockdown days.  Jason captured the feeling when he said, “The campus was missing its people”.

Jason’s background is in event management and it was in this role with the Community Musical that he began on campus ten years ago.  Apart from managing events in the Astra and O’Reilly Halls, he also had the privilege of stage managing the UCD Choral Scholars, under Desmond Earley, when they appeared in Carnegie Hall in New York in 2019.  So he loves the limelight?  “If you are an event controller or an event manager or an event administrator, your role is effectively to make other people look good.  You are the guy in the suit standing over in the corner just making sure about the stuff that people came to see.  You only get the limelight if something goes wrong.”

This captures the spirit, I think, of many of us in the support community in UCD – when we do a good job, we enable others to flourish and we stand back.

Asking about changes he has seen in our orientation season, Jasons mentioned the work of EAG and IT Services which has turned the huge time, effort, complexity and scope for error of collating and publishing sixty-four orientation spreadsheets submitted by College and School offices into a process in which Colleges and Schools can self-populate a timetable that gets assigned to undergraduate students so that they can see an individual orientation timetable on their SISWeb account.  “I mean that’s light years from where we were five or six years ago.  It makes it a much better experience for the students, a much better experience for staff, cuts out hours of work and frees up time for the ‘human stuff’ like volunteering.”

The commitment of staff and the enthusiasm of volunteers came up as big parts of Jason’s story – both the people he works with, like Aisling O’Grady, Emma Carron and Jason’s colleagues in the Student Centre, along with the student volunteers.  The seven hundred peer mentor volunteers, shepherded by Margaret MacDonagh of the Student Advisors, got a special mention as they only got a tour of campus for the first time during their own training.  They brought our new first years around the campus and to the twenty-seven separate welcome events in the Astra Hall, led by the Dean of Students, Prof Jason Last.

Asking Jason questions about himself is an interesting experience as he keeps on deflecting his answers onto tales of the successes of other people.  The last time I met Jason in person we sat on a damp picnic bench at the back of the Student Centre on a COVID distanced late May Friday afternoon, planning a July workshop on orientation for our returning second years.  As usual, he was his enthusiastic, can-do self, as we put together a session in which he would help others plan for their returning students.  I cannot imagine he expected eight weeks in a tent with 30,000 visitors but that’s what lay ahead for Jason and his colleagues, and that is what got taken in his stride.

The best of luck, Jason, as your new role in Estates unfolds.