Ahead of the new academic year when everything work-wise is both familiar and constantly changing, we wanted to take time to reflect on how we, as a University, have transitioned business to the ‘distributed office’ and  capture a picture of how our tasks and processes are being managed within this new model. 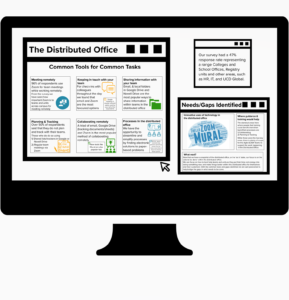 On behalf of UCD Agile and the USM Rollout Team, I compiled a survey to get a sense of what tools and applications teams and units across campus have used to transition their workload and processes, and where these tasks/processes have been optimised by making the most of the opportunities presented by remote working.

This gave us and our colleagues a chance to reflect on how we have replicated and optimised our work while working from home, and what tools we have used to do so.

The survey was divided into questions focusing on different tasks or aspects of our day in the ‘distributed office’, such as keeping in touch with and meeting your team, how information is shared, and how we are collaborating remotely. It was also asked how effectively processes were at a distance, and how they might be streamlined.

We had a 47% response rate representing a range Colleges and School Offices, Registry units and other areas, such as HR, IT, and UCD Global.

Here are some of the key themes and outputs which give us a picture of the ‘as is’ state of the distributed office & and common tools used for common tasks.

While working in the ‘distributed office’ there is a clear split between those who miss the ‘ad-hoc’ query resolution that is possible on campus (either in person or by phone) and those who find they can respond to queries more effectively and have a better ability to focus without those same ad-hoc distractions. While we may feel we fall into one category or another, it is most likely that we can identify ourselves with both sides here.

Another key theme was the opportunity to streamline and simplify processes by finding electronic solutions to paper-based problems; working as part of a distributed team created opportunities to evaluate the necessity and efficiency of some of processes and how they are executed.

In general, people seem to have looked to the tools they had on hand that were provided and approved or recommended by IT Services e.g. Google and Novell Drive, Zoom. For example:

While there are plenty of options to plan and track tasks and activity within teams, over 50% of respondents said that they do not plan and track with their teams. Local trackers/lists in Google Sheets, Google Docs and Excel and regular team meetings via Zoom were the most popular suggestions from those who do.

For collaborating within and outside your team (i.e. brainstorming and sharing ideas) a triad of email, Google Drive (tracking documents and sheets) and Zoom is the most popular method. There was an emerging appetite for newer tools like Mural, which some staff had seen used in workshops during lockdown. This is also where respondents saw a gap that could be filled with training or guidance.

A lot of these common tools for common tasks will not come as a surprise to many of you. If we think back to March when the possibility of working from home became more and more real, everything happened quite quickly in the end; while there was space for contingency planning, it makes sense that teams would use what they had on hand and see how it worked. Another thing to consider is that sometimes we only realise something doesn’t work when it doesn’t work; that’s when we look for new tools, see how other people are doing things – after all, necessity is the mother of invention.

From what we have seen with the Remote Working Group, areas like Schools & Colleges are planning ahead for the big ‘pinch points’ in their cyclical business. Recently has been more of a lean towards evaluating processes, specifically paper-based processes, and mitigating the need for in person contact in September.

Over the next few weeks we are all beginning to integrate ourselves and our teams into this even newer aspect of the ‘new normal’, we can continue to respond to new challenges in the most efficient and effective ways from within the distributed office.