With the move to remote working the focus is often placed on the working itself.  A lot of the community endeavours – coffee mornings and social gatherings – have fallen away since the move off-campus. The Multicultural Employee Network of UCD (MENU) is an exception to this. Over the last 8 months MENU have held quizzes, language classes, culture-sharing sessions, even yoga classes, all via Zoom. So how have they managed to keep the energy and engagement of a community during such a challenging time. I sat down with Julia Janiszewska, MENU’s Communication Officer, to find out.

To start off, what is MENU and how did you become involved? Well it started with the EDI Multicultural subgroup. A staff feedback survey identified that staff saw the value of student committees for international students but felt that the same was lacking for staff. So the subgroup advertised the idea, and I joined right at the beginning, back in January 2018.

MENU is a cross-section of staff. There are no roles, no scales. It includes Academic staff, Managers, Directors, Administrators and more. There are over 200 people in the Network.

We started with face to face coffee mornings, without a specific theme. It was a place for people to come and chat.

Going into the first lockdown back in March, what were your thoughts about the community gatherings?

I wasn’t sure it was going to work. We had a gathering planned, with a room and coffees booked. Then we got the information that it probably wasn’t going to happen for a while.

And then you decided to try some Zoom gatherings?

Yes. The initial thought was let’s just go ahead and do it online via Zoom. But the purpose was a bit unclear and attendance at that first zoom-session was lower than we would have liked.

I started thinking about what would work, to engage people, something new. I was doing an online course and in one class we did a quiz. I thought “that works well, I should try it”. We involved the committee to get input from as many people as we could. That went really well and was well attended.

Also, one of the members is a yoga teacher, and she suggested delivering some online yoga.

Then we started thinking about language classes but it grew beyond that. It quickly became more than just language, with a focus on culture. You can’t learn a language in an hour, but you can learn some new things about different cultures. After my session I told people they would be very happy, very satisfied to talk about their culture. Telling cool things about your country feels good.

So what are your key learnings from holding these events online?

People need a purpose, something that will catch their attention. With Zoom only one person can talk at a time. That’s why we tried a quiz first, with input from a lot of different cultural backgrounds.

It helps that our reach is multi-cultural, the majority are European but there are people from all over the world. And people are excited and interested in learning more about everyone’s culture. That’s something we all have in common.

One of the first things we did was the general introduction of languages in UCD, which was delivered by professional linguists who are a part of the community. But this grew to other members talking about their own languages, from Spanish presented by Argentinian and Spanish colleagues. To Italian, Polish, Irish, Arabic and so on. Then the focus became broader, about food, music, culture.

So how have things changed since March? 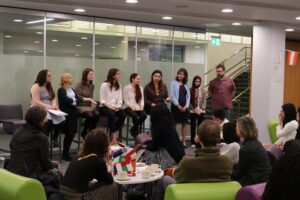 The lockdown has kind of helped us to grow. You know, when you’re on campus, you need to book a room, people need to walk across campus to get there. Maybe they’d be interested but it takes time to get to the location and you might not have that time. Getting an audience on zoom is easier.

Another thing is the organisational perspective. You no longer need to book the room, make sure the internet connection and projector are working. There’s less anxiety for organisers.

So how do you think you have you succeeded in keeping the energy and engagement?

Passion is the key to everything. Some people love their country, some might not like it very much at times, some people can be hurt by it, but it is still a part of you, your childhood, where you came from.

Of course, the favourite topic is food – even if you don’t know anything about a country you want to know about the food. And with the languages, it is fascinating to see the shared passion around language in the group.

There is a hunger in UCD for learning about other cultures.

What’s your favourite memory from the last several months?

Seeing people’s passion. It’s so cool to see people share their cultures, literature, paintings, food, but seeing the six members from different parts of Italy come together with a shared passion was very special. The same with the Spanish language class, with someone from Argentina and Spain.

When I did my Polish Language session with a colleague, I could talk about my childhood food, my interests. People want to experience that same passion in others, and that confidence. At a time of uncertainty when you can’t physically go home, you get to be there and share it for an hour.

We’ve had sessions where only one person presented. But a lot of the time when we reach out to the community to ask if they’d like to talk, they end up working together. Often they wouldn’t have worked together before. So new connections are being formed through the work as well.

I used to travel a lot. It’s really helped me to be open to more cultures. I can’t travel now, but when I’m learning from the cultures I didn’t know about, it helps me to open my mind a bit, and I hope that is what it does for others. Creating a sense of openness, curiosity and acceptance about other cultures.

So if people are interested in joining for a session, or joining the Network?

Anyone can join. To participate or join our group can send us an email to menu@ucd.ie

We’re always looking for new members. We advertise in the Ezine so you can see upcoming sessions there.

There are still a lot of languages, a lot of cultures still to cover.

Next up is Russian.