The words of John Donne’s sermon No Man Is An Island were tolling loudly for me at the end of this year’s WST21 event.

No man is an island,

Every man is a piece of the continent,

A part of the main.

If a clod be washed away by the sea,

Europe is the less,

As well as if a promontory were:

As well as if a manor of thy friend’s

Or of thine own were.

Any man’s death diminishes me,

Because I am involved in mankind.

And therefore never send to know for whom the bell tolls;

It tolls for thee.

My involvement with UCD Agile has helped me realise that by being part of various teams in UCD I am becoming ‘a piece of the continent’.  Although I am regarded as a new-ish member of staff (2018), once I found Agile I found a way to become ‘part of the main’.

As I found myself adapting to remote working and being in a distributed office, I realised I was able to work smart while being apart from my colleagues because I had the tools. My tool kit had been filled when I completed my Yellow Belt, Lean Practitioner Certificate with UCD Agile.  5 Whys, Fishbone Diagram, Anti-solutions, TIMWOODS – these may not mean anything to some, but for others they are ways of eliminating waste, using existing resources and ensuring efficiency. 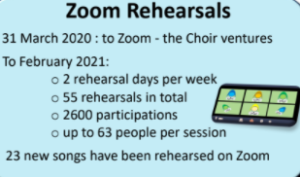 In March 2020 I needed to bring some tools to the table to work with my colleagues in UCD’s Community Choir to adapt our rehearsals to this new age of Zoom (also known as Doom!). Adapt we did and I had the statistics to prove it (March 2020-February 2021, 55 rehearsals, 2,600 participants) so when I saw Agile’s call to adventure I submitted an expression of interest on behalf of the Choir. Once Agile confirmed they would like the Choir to participate in the sessions and/or poster exhibition I needed to recruit a team to deliver.

Within 24 hours of asking members of the committee to join me, we were a confirmed team of 6. We stayed true to one of our mottos ‘Go Big or Go Home’ and took on the challenge of both session and poster, even more brave was our unique idea to host a pop-up choir session under the umbrella of Abba’s Thank You For The Music and to host the session like a show, a performance with Zoom as our stage. 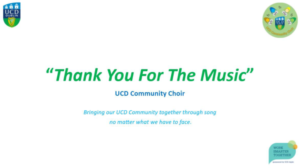 I realised I was occupying the role of Project Manager so I needed a plan. Joseph Campbell’s Hero’s Journey is always reliable so I took off on my heroic escapade. I spent time on our heroic reflection, the Choir’s online resurrection and rebirth, our technological tests and trials, which essentially means I looked at the story so far and the journey to date.

Lean Six Sigma inspires the elimination of waste…so in preparation for the WST session we wrote the script, allocated roles, held rehearsals, timed our performances, agreed costumes, fine-tuned the music and on March 11, 12.30pm, the curtain rose and the show began…

Parallel to this project, I vaguely recalled offering to participate in a discussion for Unified Support Model’s (USM) Remote Working Group, when suddenly an email appeared in my Inbox confirming my role on the panel of WST’s Becoming a Manager While Working Remotely – A panel discussion!! My mind was racing with the thoughts of my Abba stage show, but I could not let down Jeremy Britton, what’s more, I was being invited to participate with 2 colleagues for whom I had the utmost respect. “A discussion among a group” Jeremy said “give an accurate feel for what it’s like” he asked “casual”. Suddenly I was back on my hero’s journey and this time I was engaged in the dark night of the soul… “compose short biographies” he asked and then horror hit me, for this project I had no costumes, no cast and no script, I had to look at and talk about myself!

Our facilitator highlighted the need for preparation but to ensure spontaneity, the need for structure but to be prepared for flexibility and then the clouds separated and the sun shone. These skills were not what I needed to make the panel a success, these were the skills I was already using as a Manager, a Deputy Team Lead and a member of the wider Registry team. This panel was going to be a home away from home.

So as the curtain came down on WST 2021 everyone involved returned (a little wiser) to their new normal. Meanwhile, UCD Community Choir’s tour bus was starting its engine; next stop on the schedule UCD Festival 2021 and as The Whispers sang back in 1979, And the Beat Goes On.

You can view the WST21 presentation and download the slides here. 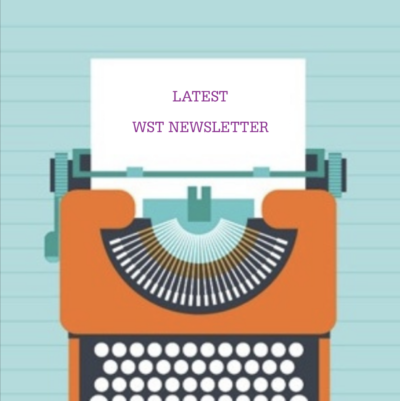